Uniforms and Donabe Rice is the first chapter of Sweetness and Lightning.

The chapter begins with a look at an average morning for the family of two, Kōhei Inuzuka and his daughter, Tsumugi, after Kohei's wife had passed six months earlier.

After Kohei gets back from teaching, he takes Tsumugi flower-viewing, seeing the cherry blossoms bloom in the park. While walking through the park, Tsumugi notices a lone girl at a picnic crying as she finishes the last of her lunch. Concerned about this, when she asks what's wrong the girl responds that she was crying "because the food was delicious". The girl introduces herself as Kotori Iida and says her mother had cooked it for them both but she could not make it to the picnic. She also says her mother owns a restaurant and hands Kohei a card for Restaurant Megumi, telling them to stop by if they want to try the food.

The next day, after work Kohei comes home to see Tsumugi in front the television, entrancing by a cooking show. This alerts Kohei into immediately needing to give Tsumugi a good meal, instead of frozen dinners he normally uses and runs to Restaurant Megumi. When they arrive, only Kotori is there, and she cooks the only thing she really knows for them, Donabe Rice. The food is delicious and Kohei promises Tsumugi that he will only give her good food like what they just had and the chapter ends with Kotori asking the question if they would come back and eat with her again. 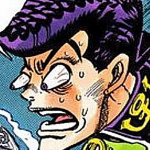